One day Michael’s school teacher looked at Anna with compassion and said:
-Life can be difficult sometimes. Your son told me that his father is an engineer and that you have to sell balloons. 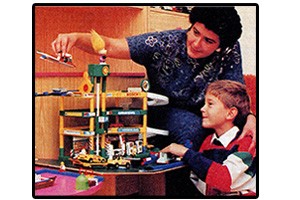 Her mother is a Supreme Court judge. Her father is a Heating & Ventilation engineer and her husband, also a reputable engineer. But what about her?


Anna’s occupation was a difficult one for her parents to accept. If somebody asked her mother what her daughter did for a living, she would reply :
– She is in charge of a company that specializes in decoration merchandise.
– Mother, we sell balloons!
– Oh yes, but not just that…
– True, we also sell accessories for balloons.

She understands her parent’s embarrassment, since her parent’s did have big expectations regarding her career. However, she overlooks their comments, because she loves what she does.

Anna Walewska is dark-haired, slender and full of warmness. She graduated from SGGW University with a degree in Architectural Landscape. Even though she enjoyed drawing and design, she soon figured out that designing gardens was not her passion.

After completing university, she left for Canada to be with her family in Toronto. She and her husband were able to find work and start earning some money. Anna’s Canadian work experience does have a funny twist. While going to school, she got a part time job at an automobile mechanic shop, where she learned an extensive amount about cars. However, her relentless spirit did not allow her to stop there. She wanted to one day own the car of her dreams. It was only natural that she would find work associated with cars. Anna, therefore, applied to work at a car dealership, cleaning cars. The owner of the dealership looked at her with suspicion and asked:
–Are you really going to clean the cars?
-I will.
-But sometimes you have to drive the cars to different locations. Do you know how to drive?
-Yes, I can drive.
-Ok. Show me.
They took a car out for a spin and after the drive, the owner says:
– You are a good driver. Do you want to work as a driver?
– I do, she replied.
Anna continued to drive different cars in the shop until one day she came upon a car with some problems. The car was leaking oil and the steering wheel was loose. She notified the shop owner. He was surprised at her knowledge about cars and said:
–If you know so much about cars, why don’t you be a dealer?

From that moment on, Anna began dealing with and buying cars for the dealership. She was enjoying her new found job. She had obtained a job that provided a steady income and paid well. Quite an accomplishment for someone who was not originally from Canada! Anna had even got her Canadian Landed Immigrant status (one step before becoming a Canadian citizen).

Anna’s husband on the other hand, was having a harder time. He was feeling caged in due to the different environment and despite having better living standards, was not comfortable in Canada. They had made a decision: they were going to return to Poland. Upon landing in Warsaw, some doubts arose regarding their decision to leave. At this point, there was no turning back.

Anna and her husband decided it was time to build their dream home. However, in those days it was done conservatively. Quite often Anna’s husband did everything himself to save money, which also slowed down the construction. This situation lasted one year and still Anna was without work. Then one day, a friend from Germany proposed to start a business importing toys to Poland. It was 1990 and in a very short period of time, the local markets were absorbing any products. Anna and her partner’s first batch of merchandise sold extremely fast. They were carried away by euphoria and big future plans! Anna and her partner then attended the Nuremberg Toys Trade Show. It was there that they were able to establish business relationships with numerous companies. One of those companies was ‘Everts’, a company that manufactured and printed balloons. This joint business opportunity looked promising and looked promising and it was decided to take on this new venture. The balloons would become an extension of their toy business, since nobody was really treating balloons that seriously.

A loan was taken out from a German Bank and with the addition of personal funds, everything was put towards the new business. Anna with her partner purchased beautiful, solid, functional and expensive children’s tables. They started to calculate the profits with regrets that only 525 units were purchased. Soon after, it became obvious that they would become overstocked with inventory. A company that originally promised to buy most of the tables went bankrupt. Anna had only been in the business for one year. All the profits were consumed by inflation, loan interest rates and related expenditures. She still remembers the terrible nightmares she would have. Yet at the same time, the happiness she experienced when she managed to sell a few tables. In reality, Anna and her partner were bankrupt. This had become a complete failure.

Something had to be done to finally start earning some money. Her partner returned to his old job, since he had a family to support and had to pay back the loans. Anna promised to pay him back half of the loan as soon as she was able to.

In the meantime, Anna had enrolled in an MBA course at the International School of Management. Despite her problems with the business, she was determined on completing the course. She felt humiliated. Most of the attendees in the school were established businessmen and CEO’s of big companies. And there she was…..with a store full of unsellable merchandise and no money. Trying not to draw any attention to herself, she quietly began learning about financial practices, marketing research and negotiation tactics. The course was very interesting but Anna felt that everything she was learning was more relevant towards big corporations. It did not seem useful for her situation. Regardless, she graduated with a diploma. Two failures would be too much to handle.

But her “table and balloon” problem was still looming over her. It turned out that several clients were interested in a combined deal. They would agree to buy the tables if she also provided different types of balloons. Anna began to drive to Germany twice a month to bring balloons back to Poland, sleeping in her car to save some money. As her inventory of tables got smaller, her request to get more balloons grew and so did her drives to Germany.

The real turning point occurred during the International Trade Show in Poznan, Poland. It was a real success, with more than 300 companies interested in purchasing balloons. Anna’s family however, decided that it was enough with the crazy trips. It was time to go to work like normal people did.

It was a difficult decision, but she decided to go against her families wishes and went alone to the Nuremberg Toys Trade Show. She was hoping to find a business that would partner up with her. She was surprised when several of the companies she knew from previous trade shows found her trustworthy and were willing to do business with her. But it was the CEO of a German company called ‘Everts’ that told her:
-I will be in Warsaw on Thursday.
It was Tuesday. Anna had a long drive ahead of her travelling across Germany with a car full of merchandise, while the Everts’ CEO would arrive in a private plane.

During that first meeting, Anna realized how much she had learned at the International School of Management. The knowledge and information which was all theoretical was now becoming very practical and beneficial, especially during the negotiation process.
Within two weeks, a Polish-German company called “Everts-Pol” was established. It was like something out of a movie. In just two months, the company had done a complete turn-around. Anna’s company was generating income, profiting and cash flow was significantly improving – and along with all that came – trust. Clients did not have to wait for their deliveries and there was dynamic growth in the products offered. As a result, more balloon printing machines were installed on site. New orders from big companies started coming through – all to have their logos/advertisements printed on the balloons. The balloons are brought in from Germany, but the printing is done in Poland. Even the Germans are surprised at the quality of the printing.

-The situation changed so fast– thought Anna- it may signify further success or a big loss. No matter what, I thought it was important to take advantage of a good opportunity. Our German counterparts are ensuring continuous production and therefore a future for this company. We have 35 employees and they need to have work for today and tomorrow. Polish regulations allow the hiring of only 7 employees without having to guarantee permanent employment. We currently have machines for all different color printings. I see my real success however in a different area: My husband became convinced about the company’s prospects and now works alongside me. And one more success: all the employees make up a family and along with us, are engaged in the company, solving problems and advising on improvements. I am an employee, just like them, because it was decided that we would invest any profit over the next few years, into the company. Therefore we are working together towards the good of the company. I work hard, but I love what I do and that is the reason why working 12 hours a day is not so tiresome. I don’t know if it’s a passion or an obsession.

It is true that Anna focuses most of her time on her company. But a rule was established that every Saturday and Sunday is dedicated to spending time with her family. After a long week, these are days that Anna and her husband do not want to do much of anything. However since Anna’s seven year old son loves to ride his bicycle, they bought some bicycles and the three of them go bike riding in and around the city.

-Sometimes I feel sad and even envy some my friends. They are all pretty, well-dressed and modern women. They tell me where they have been and what they have seen. Everything is organized and taken care of in their beautifully decorated homes. As they hug and kiss their youngest child, they tell me of their plans to have a third to add to their perfect happy family. In that moment, I think that maybe all my goals to improve the company, to buy one more printing machine or to increase profits, are far more very materialistic in comparison.
-But you cannot judge everybody the same way.
-Happiness comes in different forms.